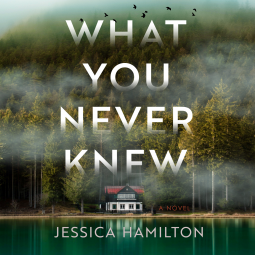 Thank you to Dreamscape Media for the audiobook version of this novel via NetGalley.

Idyllic Avril lsland, owned by the Bennett family, where their hundred-year-old cottage sat nestled in acres of forest. Forty-year-old June Bennett believed that the island had been sold after the summer of her father’s disappearance when she was only twelve years old. It’s months after the shocking death of her older sister May in a fatal car accident, that June finds out that the cottage was never sold. Avril Island is still owned by the Bennett family and now it’s hers.

Still reeling from the grief of losing her sister, June travels back to Avril lsland in search of answers. As she digs, she learns that the townspeople believe her father may have, in fact, been murdered rather than abandoning his family in the dead of night, as she was led to believe by her mother. And that’s when she begins to notice strange things happening on the island–missing family possessions showing up on her bed, doors open when she had locked them closed. It takes June no time at all to realize that her childhood summers at Avril Island were not at all what they had seemed to be.

Compelling, intriguing, mysterious are three words that describe this audiobook perfectly! The story is told from alternating POV’s – parts from June’s perspective and part’s from her older sister May’s perspective. Their mother has passed away and their father had disappeared years ago when the girls were younger, so when June’s older sister May loses her life in a fatal car accident, June finds herself in possession of their family cottage on Avril Island; much to June’s surprise, as she thought their mother sold the property years ago. June decides to return to Avril Island and tries to uncover clues and get answers to the many questions she has. Why did their mother lie and say the family cottage had been sold? Why did their father disappear all those years ago, never to return or try to get in touch with his daughters?

As June arrives on Avril Island she runs into an old childhood friend of hers and May’s when they were younger. They quickly becomes friends and then strange things begin happening, things that June cannot explain. Desperate to unlock the secrets of those many years ago, June searches for answers on Avril Island that have long since been kept secret and buried. What she discovers shocks her! I definitely didn’t see many of them coming and I LOVED IT!

It was interesting to hear May’s POV being told from beyond the grave – she has passed but is able to be “present” and see things that June does, which was quite interesting for sure. A great novel that I loved and cannot recommend enough! I also enjoyed the narrators for this audiobook, their voices and their tone of voice worked well with the novel.

Well done Jessica on your debut novel. I will definitely be on the lookout for more of your titles in future!