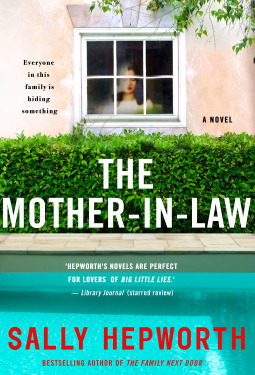 Thank you to the Publisher, St. Martin’s Press, for the eARC copy of this book via NetGalley.

A twisty, compelling novel about one woman’s complicated relationship with her mother-in-law that ends in murder…

From the moment Lucy met her husband’s mother, Diana, she was kept at arm’s length. Diana was exquisitely polite, and properly friendly, but Lucy knew that she was not what Diana envisioned. But who could fault Diana? She was a pillar of the community, an advocate for social justice who helped female refugees assimilate to their new country. Diana was happily married to Tom, and lived in wedded bliss for decades. Lucy wanted so much to please her new mother-in-law.

That was five years ago.

Now, Diana has been found dead, a suicide note near her body. Diana claims that she no longer wanted to live because of a battle with cancer.

But the autopsy finds no cancer.
The autopsy does find traces of poison and suffocation.
Who could possibly want Diana dead?
Why was her will changed at the eleventh hour to disinherit both of her adult children and their spouses?

With Lucy’s secrets getting deeper and her relationship with her mother-in-law growing more complex as the pages turn, this new novel from Sally Hepworth is sure to add to her growing legion of fans.

Addictive, thrilling, and full of shocking twists and turns. The Mother-in-Law is the first book by Sally Hepworth that I have read and it will definitely not be my last. This book had me flipping through the shocking pages to see what would happen next. What is better than a family drama that is full of lies, deceit and betrayal? Full of secrets, it seems no one is being honest with themselves, let alone the rest of the family. When everyone is hiding their fair share of secrets, who do you believe? Is anyone innocent or are they all to blame?

I enjoyed reading about the dynamics of the friendship, or lack thereof, between Lucy and her mother-in-law. I mean, who doesn’t want to get along with their mother-in-law and be accepted fully by her? And that is all Lucky wanted – to be accepted by Diana and feel that she was considered good enough to be married to Diana’s son Ollie and feel a part of their family. It should be easy enough, right?

Well this is not the case. Lucy has a hard time connecting with her mother-in-law Diana, and Diana is not making it easy on Lucy. Diana seems aloof, cold an indifferent. Is it just Diana’s nature and the way her personality is, or does she simply dislike Lucy for no apparent reason?

We are introduced to a wide variety of complex and dynamic characters in the book. We have Diana and Tom, who are married, and have two children Ollie and Nettie. Ollie is married to Lucy and Nettie is married to Patrick. With so many characters in this book who had their own reasons for disliking or even hating Diana at times, is one of them responsible for Diana’s death? After all, each of them have their own share of reasons for possibly wanting to murder her.

Well job Sally. I look forward to reading your other novels.