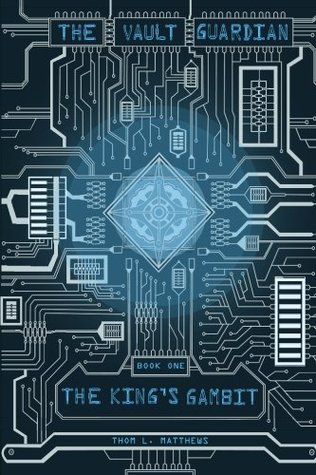 Thank you to the author for sending me a free copy of The King’s Gambit. The book cover is stunning and the synopsis of the book had me intrigued to read this book.

It has been centuries since Earth’s societies crumbled, leaving the planet a nearly barren wasteland. Since then, the remnants of humanity have slowly rebuilt isolated civilizations with new cultures and ideas, all seemingly unaware of how the world ended. It is a world ravaged by war, illness, and famine. To Benedict Limmetrad, the outcast son of Freztad’s former chief, that world is about to get much bigger. When the mysterious forces of a faraway land capture a beloved member of his village, Ben embarks on a quest to bring her home-only to discover that the world is far more dangerous and mysterious than he had once thought. His journey proves perilous, and he is faced with death and danger at every turn. Throughout his quest, Ben’s values and sense of self are pushed to the limits as he uncovers the secrets of the world, its past, and himself.

This book was very well written. I enjoyed the style of writing and the way the story was told in such a way to grab the audience. I enjoyed reading about the various civilizations and how they were all different from one another in various ways. The characters and the civilizations all had unique names which I liked and felt added to the uniqueness to the story.

The main character Ben was abandoned by his father. Ben has no memory of him at all, or his mother, and was raised by his father’s sister. The only thing Ben has that belonged to his father was a watch with a mysterious symbol on it. But Ben doesn’t know what the symbol is or what it means.

Ben grew up with his cousin Rose. They are best friends and like siblings. They did everything together, and grew up together in the village of Freztad.

We follow Ben on his journey as he leaves the safety and comfort of his village on a quest to rescue someone he cares about who left the village and was supposed to return a few days later but seems to have vanished. Ben braves the outside world, having only been in his own village of Freztad. It is all he has known and he has no knowledge or experiences with other villages.

Ben faces many challenges and does quite well I think in the big world that is new and unfamiliar to him. He is faced with many trials and tribulations that he must overcome, in order to find the missing person from his village that he is looking for.

Overall I really enjoyed this book and reading about the various villages that were created in this new world. Since this book is the first book in a series I am curious to know what will happen next.