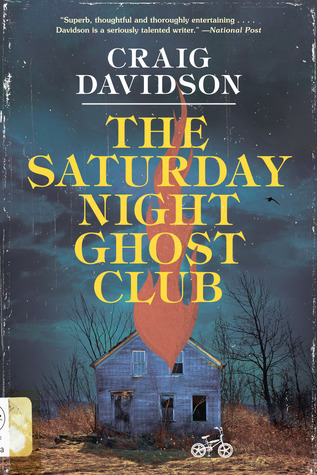 Thank you to Penguin Random House Canada for sending me a beautiful hardcover copy of this book to read and share my review with my followers. This cover is stunning and is kinda creepy, and I was thrilled to read this with Halloween just around the corner. This was the first book I have read by this author, and bonus… he is a Canadian author 🙂

ABOUT THE BOOK (found on Goodreads):

When neurosurgeon Jake Breaker operates, he knows he’s handling more than a patient’s delicate brain tissue–he’s altering their seat of consciousness, their golden vault of memory. And memory, Jake knows well, can be a tricky thing.

When growing up in 1980s Niagara Falls, a.k.a. Cataract City–a seedy but magical, slightly haunted place–one of Jake’s closest confidantes was his uncle Calvin, a sweet but eccentric misfit enamored of occult artefacts and outlandish conspiracy theories. The summer Jake turned twelve, Calvin invited him to join the “Saturday Night Ghost Club”–a seemingly light-hearted project to investigate some of Cataract City’s more macabre urban myths. Over the course of that life-altering summer, Jake not only fell in love and began to imagine his future, he slowly, painfully came to realize that his uncle’s preoccupation with chilling legends sprang from something buried so deep in his past that Calvin himself was unaware of it.

This book was a great choice being that Halloween is just around the corner. We read alternating timelines – when Jake was a young boy and a member of The Saturday Night Ghost Club with his friend Billy, his Uncle Cal and his Uncle’s friend, and the present when Jake is a grown man with a family of his own and a professional doctor.

It was fun to read about all the adventures of the Saturday Night Ghost Club and read about what they were up to and all of the urban myths they were trying to discover and uncover the truth about. Their club took them on many ghost hunts and truth seeking adventures, and it was fun to read about all of their findings. It was refreshing to read the story from Jake’s point of view as a young pre-teen and see the world through his eyes. He was a fun character to read and learn about, and to watch him grow and see his personality come through on a daily basis.

His Uncle Cal was quite the interesting character. He seemed like the fun Uncle that everyone wishes they had in their lives. He was spunky, had a sense of adventure, like to hunt for ghosts and believed in all kinds of weird paranormal stuff. He was young at heart and up for adventure. It was interesting to read along and find out that Cal had secrets of his own, secrets that he himself wasn’t even aware of. That was certainly a twist in the book that I enjoyed and didn’t see coming.

Overall the book was an interesting read and I enjoyed the refreshing take on urban myths and the idea of the Saturday Night Ghost Club.